Scotch thistle is the national emblem of Scotland, and being of Scotch ancestry myself, perhaps I (Marshall) was destined to meet up with it. It gained its honor in Scotland as an impenetrable barrier to barefooted Viking invaders who tried to cross dry, thistle-covered castle moats. Today, it takes its place as the most invasive weed on the Fox Creek property. Because of its size (5′ to 8′ tall or taller) and high rate of propagation, it has the potential to deny access to people and wildlife to a good portion of the land. For more descriptive information, click here.

Control of this prolific plant is difficult once it’s established (and we have apparently had a history of infestation here). Though it is an annual or biennial, it can act as if it’s a perennial. Each plant may produce tens of thousands of seeds, seeds which can persist in the soil for many years (some say seven years, some say twenty!). A waterproof coating on the seed prevents germination until it is washed away. We’ve been working on controlling it since 2001, and we had a big surprise in 2003. That year, we had a wet spring, and an unbelievable amount of seed germinated, requiring us to hire help to cut them before they could go to seed. 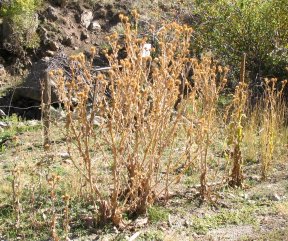 To see a photo of what it looked like, click here. We had to mow it, but from the seat of our little tractor, we couldn’t even see where we were going.

To the right is a photo of mature Scotch thistle going to seed on a roadside in our area. To a thistle hunter, this is not a pretty sight.

In 2004, we had a wet summer, and in the fall a shorter version of the plant came up in great numbers. We call them Christmas trees, because they are covered with seed pods, as shown in the photo below. It is a mistake to believe that just controlling the larger plants is enough. There is the potential for many smaller plants to produce as many seeds as does a large plant. 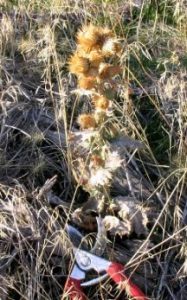 By the time we got to these “Christmas trees,” they were starting to go to seed, and we had to cut them by hand and bag up the seed heads.

Later in the fall, seeds that germinate form rosettes. They winter over and then spike or bolt and flower in the late spring. This is the more classic, biennial life cycle.

The fact that the seeds can persist for many years and then can germinate at any time of year, makes Scotch thistle a worthy adversary, indeed. We’ve been making substantial progress, but in 2008, we again had a wet spring with a lot of germination. By persevering, we were able to minimize the amount of new seed to hit the ground.

Our practice at Fox Creek is to use the least intrusive available methods in controlling weeds. We use herbicides as a last resort for Class A perennial weeds – like whitetop. But it turns out that the young thistle rosettes are fairly easy to deal with in the early spring, using a sharp hoe or, later, a sharp shovel. It’s just about as fast as spraying would be. Each swing of the hoe can bring a distinct click or pop that you can hear and feel when the tap root is cut. 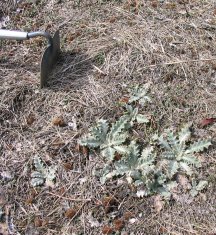 Here’s a picture from March, 2004. If Scotch thistle has an Achilles’ heel, it may be the grayish green color of the small rosettes. This distinctive color allows them to be spotted quite easily in the surrounding vegetation. They have a hard time hiding from that sharp hoe…

Later on in the spring, the plant bolts or spikes in preparation for flowering and seed production. At that time, the taproot becomes too tough to cut easily, and the diameter of the plant expands, making it difficult to reach the root. So we rely then on long-handled pruning shears to cut the taproot. By leaning on the end of the fixed handle and then pulling the movable handle, it is possible to make an easy, clean cut of the taproot. The shears we use are made in Japan.

Mowing, using a tractor-driven brush hog, is another means of control on the flatter areas where the density tends to be greater. This would be particularly useful to stop plants that are beginning to flower and set seeds, as was the case in 2003. But watch out for plants that the tractor has laid over without cutting. Even though the plant is lying down, the root may not be severed, and the seed pods can still be growing… And if not all the leaves are removed, mowing can allow the plant to regrow from the root. Going back over the mowed field a little while later with the long-handled pruner is a very good idea. Mowing with a steel-bladed, gasoline-powered weed whacker is performed on slopes and areas that the tractor can’t reach. We use a Honda 4-stroke. Be sure to wear goggles and long sleeves…

Disking would also be a possibility, but we prefer to disturb the ground as little as possible. The thistle seeds germinate readily in disturbed ground. In particular, there appears to be some synergy between the thistle and the gophers and moles. The thistle germinates readily on the mounds of dirt they produce, and they eat many of the plants – but not all of them…

Another option for thistle control is livestock grazing. Before cattle were excluded from Fox Creek, we noted that they were helpful in grazing young thistle plants and impeding their growth (but not killing them). We understand that goats will browse more mature thistle. We are restricted from grazing in our CRP contract area, but would be interested in seeing if some goats might help out in certain other areas.

If all this sounds like a lot of work that produces little economic benefit, you’re partly right. Here at Fox Creek, we are lucky that we have time available to get it done. But, if you have a thistle infestation, try to put some time in each day on control. Really, it’s an excellent excuse to get out into the peace and beauty of the countryside. The sound of the birds and of the water in the creek are beautiful accompaniments to what can be a very gratifying and most worthwhile task.